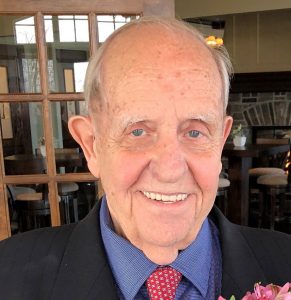 In the late 1970s and early 1980s, a series of disasters involving the chemical industry led to a steep decline in perception of the safety of the chemistry sector globally. In 1983, the Canadian federal government commissioned a study consisting of 12 chemical industry leaders to determine the role of the government in regulating the industry. 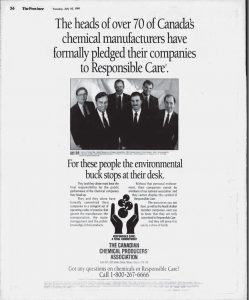 The report was published in February 1984 and included a Statement of Guiding Principles, later to form the basis of Responsible Care, signed by all project members.

In December 1984 in Bhopal, India, the world’s worst industrial disaster occurred. Over 500,000 people were exposed to methyl isocyanate gas and an estimated 8,000 died within two weeks.

A special CCPA Board meeting convened immediately after. Although 96 per cent of members had signed on to the inaugural version of Responsible Care, a motion to make it mandatory was approved unanimously. All companies were then urged to review their current safety practices to identify potential weaknesses and report their findings.

“The Canadian chemical industry is committed to taking every practical precaution to ensure that products do not present an unacceptable level of risk to its employees, customers, the public or the environment.” 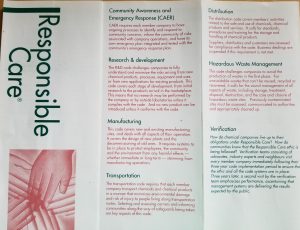 One of the first Responsible Care pamphlets.

In 1988, the CCPA presented its Responsible Care concept to representatives of the US Chemical Manufacturers Association (now the American Chemistry Council) and it was adopted there. Soon after, an effort was initiated to bring together all national chemical associations, with the intention of establishing Responsible Care worldwide.

This led to the formation of the International Council of Chemical Associations (ICCA) in 1989 and the ICCA Responsible Care Leadership Group which exercises guardianship over Responsible Care globally and connects with other international institutions such as the United Nations Environment Program (UNEP). 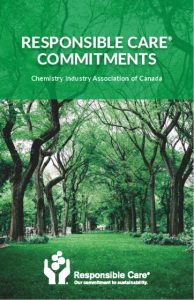 Today, Responsible Care is practised in 73 countries and by 96 of the 100 largest chemical producers in the world – numbers that continue to grow. Over the years it has evolved from an industry-focused initiative centred on worker, community and environment safety, to by 2010, encompass a broad “all of society” emphasis on sustainability and societal expectations. In 2019, the Responsible Care Codes were updated to include new commitments for Canada’s leading chemical companies to engage Indigenous communities through proactive and formal processes and in 2021 will be updated again to include Codes pertaining to diversity and inclusion.