CIAC had an opportunity to speak publicly with the Hon. Chris Ballard, Ontario’s new Minister of Environment and Climate Change on November 29 in Toronto.  Following Minister Ballard’s address at a CIAC-sponsored breakfast meeting of the Public Affairs Association of Canada, CIAC President and CEO Bob Masterson welcomed Minister Ballard to his new post and wished him well with his new portfolio.

Masterson reminded the Minister that under his predecessor, an unprecedented suite of far-reaching new policy measures had been introduced. “We have been sprinting for the past three and a half years,” said Masterson. “This pace is not sustainable for the chemistry industry and your other key stakeholders, as well as your departmental officials.  At this time, we need to catch our breath and focus on implementation of previously announced policy measures rather than turn our attention to any additional new policy pronouncements,” he added.

Additionally, Masterson noted that CIAC and the industry support meaningful carbon policies that recognize and reward world class producers.  He also asked the Minister to ensure that federal and provincial policies and regulations be aligned to avoid overlap and duplication and the addition of multiple price signals on the same emissions. 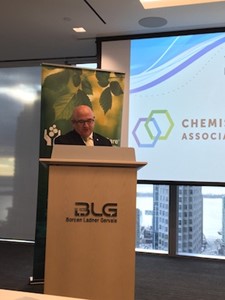